You are here: HomenextUncategorizednextWeekly Updates April 2022

It seems this week the garden is really springing into life! The carrots and fava beans have sprouted and Poly 1 is literally bursting with salad leaves so please do help yourselves when on site. As the dry weather continues our volunteers have been tirelessly watering everyday.

Broccoli, beetroot and radish have been sown throughout the week and the flower greenhouse is too filling up with a host of plants including Zinnia, Honesty, Cosmos, Nigella and plenty more.

The Rotary fair is only 5 weeks away! Nasturtiums and sunflowers have been pricked out and potted up and we are looking on course to have a varied display for the big day.

Growing Well was back on Monday with projects including work on a brand new insect hotel for the garden. We have donated a spare compost bin to our friends at Tideswell Garden. The square foot bed has been re-strung and is ready for planting.

Give Peas a chance was back on Saturday – The GPAC children were pleased to spot green shoots from their planting 2 weeks ago. They did pH soil testing and had a visit from Helen who explained all aspects of compost (thank you to Helen).

We have the go ahead for a pot sculpture in Serpentine Walks for this years Flowerpot trail. This years theme is ‘Jubilee’ to coincide with the Queen’s platinum jubilee celebrations. As you can tell it’s been a busy week on site and within the community. Long may it continue!

I hope everyone has had a pleasant Easter. Another week at the Serpentine has flown by.

Away from the garden it’s been a busy week too.

As the last of the frosty mornings draws near (we hope), it’s been a chance to catch up on our sowing list throughout the week.

Melissa has once again been busy showing new volunteers/members around the garden and working on her Growing well projects. She has also gone to great effort to produce some new volunteer information forms for anyone who would like to update us on their involvement in the garden or if there is a new project they’d like to see introduced. These forms can be found in Poly 3. Feel free to take one home or fill in on site.

And we encourage anyone with any questions or queries to speak with Melissa or myself either on site or through email.

It’s been another busy week at The SCG!

The temperature may have dropped below freezing but the enthusiasm from our volunteers has remained high.

Give Peas another Chance

As well as working tirelessly behind the scenes and on her Growing Well workshops, Melissa has been moulding young minds and promoting The SCG with her work with the British Science Association. Judging by the comments left by the 370 participents across Buxton they have been a smash hit!

The link between SCGS and the Community Leaders Programme with the British Science Association has been a fruitful one. Each day from 21-31st March Melissa has visited 7 community groups or schools in the Buxton area, including an event for Growing Well participants. 370 people have taken part in GROWTH based activities, learning about SCGS and what we do! Many connections have been made or strengthened with varying age groups hoping to get involved with SCGS in the future. The best moments were observing reactions: eyes wide open, jaws dropped. And comments like: “This is science??? This is so much fun!” “You can actually do that with food rubbish??” “I thought I knew a lot about horticulture, but I never knew this stuff.” It was clear how highly thought of SCGS is in the wider community. It was great fun interacting with so many people wearing an SCG hat! New kit purchased by the BSA and used for the workshops will be put into general use at SCG, so look forward to having more gravel trays, trugs, buckets and gloves!

Lastly, we were donated a little easter treat from a generous supporter 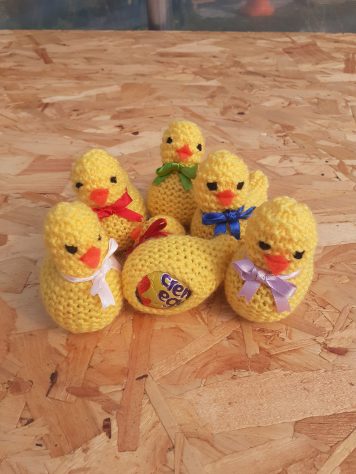 – Creme Eggs hidden in delightfully crafted ducklings. For anyone wishing to ‘donate for a duckling’ there are still currently half a dozen on site, available for £2 each. All proceedings go to the SCG. And be quick, some of our volunteers have a sweet tooth!